Portugal has a bad record for road safety but for cyclists, particularly if you avoid the big towns, the dangers are probably no worse (or better) than in many other countries.

It’s statistics that distort the picture. Overall, Portuguese drivers may have a high rate of accidents but the country‘s population is only about 10 million and most of those people live in the cities.

Much of the country consists of rural areas where a much bigger issue than road safety is depopulation.

I wouldn’t want you to think there is no danger but as a cyclist, you’re much more likely to be on a country road facing problems like potholes, punctures and where to fill your water bottle than being involved in a major traffic incident.

One of the most annoying things about Portuguese drivers is that they very rarely use indicators if they’re about to turn!

Some also drive too fast, too close and overtake when it’s not safe… but you get drivers like that everywhere.

Drivers quite often sound their horns as they come past cyclists but this is actually just a polite warning and not being aggressive.

To sum up, in years of living (and cycling) in Portugal, plus riding the length of the country on a previous visit and various other cycling trips, I’ve not had or witnessed any accidents.

Stay off major roads and away from big cities and your chances of being involved in an accident diminish rapidly. In fact, in some parts of the country you can cycle for long periods – even on major roads – and see hardly any traffic.

Road surfaces vary from excellent to pretty bad but the majority of roads are okay – helped by the lack of heavy traffic.

One of the biggest problems in Portugal for cyclists is cobbles. Many town centres have their streets laid with marble pavements and large granite cobbles, which look pretty but are terrible for riding on – particularly on a heavily-laden bike at the end of a long day. (I’ve had more parts fall off or shake to bits in Portugal than any other country in Europe!)

Portuguese signposting is also generally pretty poor. In towns they often start okay then disappear completely. (Consistency is not a Portuguese trait.) Rural areas can be even worse.

Some parts of the country are worse than others but you’ll often come across back roads that have no road numbering and no sign to tell you where they’re going. Which given the lack of decent maps of Portugal is not very helpful.

Portuguese roads use a confusing number of designations/numbering systems. I’ve summarised the main ones below:

Other designations you may see include EN (another term for N roads) R (regional) and M or CM (municipal roads).

With N roads, those starting with a 1 were originally the most important. Those beginning with a 2 were secondary and those with a hyphen (e.g. N1-23) were branch roads. However, this 1945 system is largely redundant as many roads originally given a 1 are now minor routes of little importance.

It’s not a good idea to plan a route using road numbering. A few N roads should be avoided at all costs. On the other hand, I know one road in northern Portugal (the N102 going from Trancoso towards the Douro valley) that has N, E and IP designation. Yet, it’s little more than a quiet country road where you might see a handful of cars every 10km.

The basic rule of thumb is to avoid anything that looks like a motorway. If it has two carriageways and crash barriers, it’s probably closed to cyclists. Otherwise, use common sense. The Basic facts section gives details on which are the most populated areas of Portugal.

And if in doubt, ask.

Coupled with the above, the other big problem in Portugal is getting hold of decent printed maps. The best maps are online – Google, Open Street Map and Bike Map – are all much more accurate and up to date than any printed maps.

However, if you do want a paper map it might be safest to buy one before you leave as few places in Portugal sell decent maps. (If you do get stuck, the FNAC chain is probably your best bet in Portugal – if you can find one.) 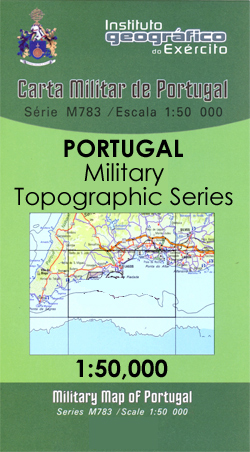 The Portuguese military produces highly-detailed topographical maps – but these are mostly decades out of date. At 1:25,000 and 1:50,000 they are also too detailed and large scale for most cyclists.

The military maps are available from the Instituto Geografico do Exercito – see www.igeoe.pt. You can also occasionally find them in larger FNAC stores, but not always and they’ll probably only have a limited selection.

Michelin maps are generally accurate. However, they leave off many minor routes, often showing large blank areas where there are perfectly good roads.

The maps are also disgracefully out of date. For example, they still show a railway line (plus stations) in northern Portugal that hasn’t been operational for decades and don’t show a number of new main roads – even as projected routes – despite them having Ibeen open for a number of years.

I also think Michelin’s ‘regional’ maps are a joke. They produce a 1:400,000 map of the whole of Portugal or three 1:300,000 regional maps. But I’ve never managed to spot any difference in the content. As far as I can see, the regional maps don’t include anything that’s not on the national map – it’s just printed bigger and with more white space. (Plus the regional maps each cost as much as the single national map.)

Turinta’s maps are pretty good and show most – but not all minor roads. (Better than Michelin’s.) They don’t have any contours, height indicators or anything to show hills. But they are quite easy to read and give a good overview. Like Michelin, however, they are out of date – showing railway lines that have been closed for decades and not showing motorways that were built 10 years ago. It’s also unlikely you’ll see them for sale anywhere in Portugal so buy in advance.

A Portuguese company called ForWays produces a range of regional maps that you can often find in local bookshops/newsagents – although these are not currently available online. Their Alentejo map has been recommended by some fellow cyclists as better than the Michelin version. I’ve got a copy of the company’s Algarve map and it’s quite good (probably more detailed than Michelin) but not 100% accurate – plus it marks some roads that are dirt tracks and leaves off others that are sealed.

An alternative option, if touring, simply buy a road atlas and cut out the pages needed – they can be folded into the map case on a bar bag and this often works out much cheaper than buying lots of individual maps.

Online sources for Portugal maps include:

Mapsworldwide.com – seems to have a good selection, including the detailed military maps

The Map Shop – independent retailer in Upton upon Severn. Pretty basic website but has a good range.