This circuit provides a real flavour of the Alentejo – but you’ll find out the hard way that this region’s ‘plains’ are not exactly flat.

The scenery is beautiful – starting from the marble town of Estremoz, once a royal city and still famous for the dramatic white marble tower that forms part of its castle, now an upmarket hotel.

From Estremoz, it’s south via forested hills and then more rolling countryside, dotted with cork oaks and olive trees, to the attractive small town of Redondo.

Then continue north-west to the hilltop castle at Evoramonte, which gives you an amazing panoramic view of the Alentejo… if you make it to the top! 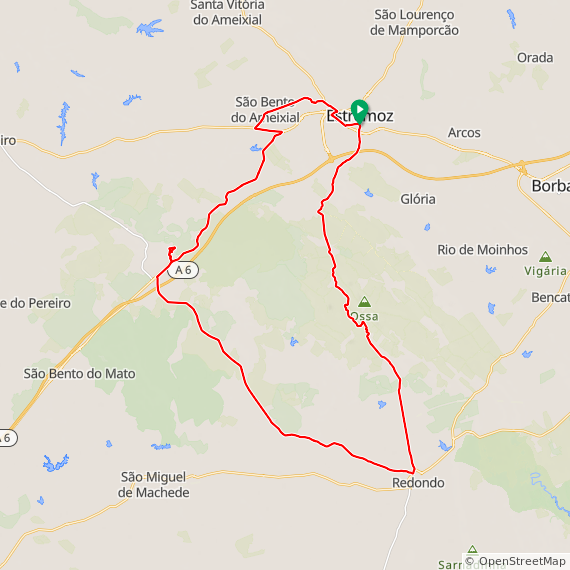 71.5km / 846m. Moderate-tough. Rolling hills and a couple of more serious climbs – including the (optional) ascent to Evoramonte, which involves an ascent of 100m in 1.5km.

Accommodation – there’s a wide range of hotel/guesthouse options in Estremoz, likewise in Évora (to the west), plus some accommodation in Redondo. There are also various rural hotels and guesthouses in the area.

Shops & supermarkets – best bet is Estremoz or Redondo, you may find a small shop in Evoramonte.

Cafes & restaurants – plenty of options in Estremoz or Redondo. You’ll also find cafes and restaurants at Evoramonte (down on the mail road).

NOTE: this section is not finished – to be completed

To begin: The ride starts from the Rossio in the centre of Estremoz – a vast square surrounded by some grand buildings.

The old centre of Estremoz is all cobbled – which can be very hard work on a bicycle – but worth exploring as it’s an interesting old town. It’s also well worth getting up to the castle, both for the architecture up there and the views out over the city walls and beyond.

Evoramonte: You come into Evoramonte on the main road. From the bottom it looks a fairly typical village with a few cafes and shops and some nice old buildings.

The castle is way up above and you might be put off by the look of the hill. But if you’ve got any energy to spare, do go up – whether you walk or ride.

Dating back to the 12th century, it was later rebuilt in the early 1500s in Manueline style, a Portuguese design from the late Gothic era, named after the king of the time. The castle is unlike any other that I’ve seen anywhere in Portugal – the best way to describe it is like a (semi-derelict) giant’s sandcastle!

There’s also an attractive old village within the walls and a fantastic 360-degree panorama of the Alentejo stretching way off into the distance.