Looking down from the stunning castle at Monsanto

Note: This route was previously called Border Castles but I’ve changed the name in order to avoid confusion with the guided tour of the same name.

Overview: This route takes in a string of my favourite places in Portugal.

Since designing the route, I’ve now explored even more of the regions that it covers and hope to update the route during 2019 to make it even better.

To keep things relatively simple, the route is currently split into two sections:

In time, I hope to extend the route to include a northern section going up to Braganca (and then maybe west towards the Atlantic).

For anyone interested in doing the whole length of the country, it would also be possible to connect this route with the Alentejo to Algarve – but in reverse.

For me, the castles are just the most obvious attraction along this route – but they’re just the dots along the line. This route takes you through some of the most spectacular, traditional, least-populated parts of Portugal.

As you head north (assuming you do it in this direction), you’ll ride some lonely roads across the rolling lands of the parched Alentejo and then north into a wild, open landscape with views of Portugal’s highest mountains – the Serra da Estrela – to your left and Spain in the distance to your right.

Highlights of the Portugal Explorer include:

Visit the individual pages for detailed descriptions – or see the maps below for an overview: 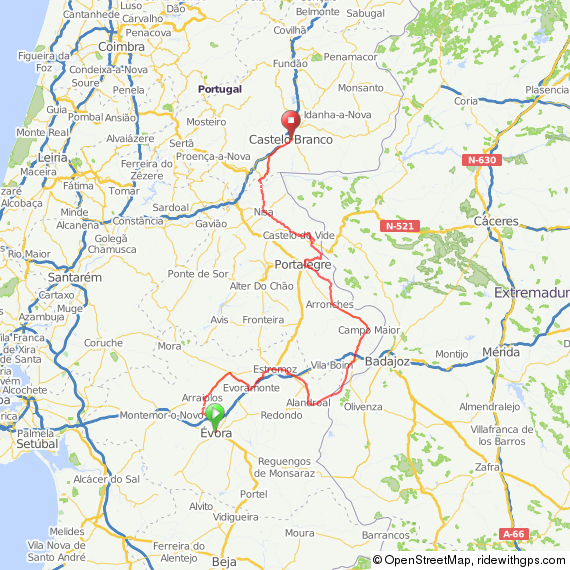