The Pedal Portugal website has now been going for six years – I wrote the inaugural post on 18th August 2011 for what was then a pretty basic site.

Since then, it’s fair to say that Pedal Portugal has come to play a major part in my life. As well as maintaining this site and trying to keep all the free information up to date, I’ve branched out into writing guidebooks to cycling in different parts of the country (two so far) and running my own guided bike tours.

But it hasn’t always been like that… the first time I came to Portugal was in 2005 as part of a year-long tandem trip and I hardly knew anything about the country. This post tells the first part of the story of Pedal Portugal – and how my wife and I came to fall in love with the country that now feels like our second home.

The first time I cycled through Portugal, it really was a voyage of discovery. Or ignorance, depending on your viewpoint.

Some of my information gaps were practical – like the fact my planned bottom-to-top tour involving riding pretty much the whole way against the prevailing wind.

I also had no idea how much of an impact Portugal was going to have on my life. My wife Carolyn and I arrived on our tandem while on a somewhat belated gap year. Then in our 40s, we had taken a 12-month career break to cycle around France, Spain and Portugal.

We had left our UK home in spring 2004. After about six months riding around France, the days were getting shorter and cooler, so we thought it made sense to keep heading south. No point getting cold and damp if we didn’t have to.

Coming south on the Spanish coast in autumn 2004

We spent the final months of 2004 exploring Spain’s Mediterranean coast and the first few days of the New Year saw us cycling west across the bottom of the Iberian peninsula.

Neither of us had been to Portugal before or read much about it in advance. We vaguely expected it to be like Spain but with a few minor differences. Not quite sure what they would be but…a slightly odd language, a bit cheaper, fewer tacky coastal developments and…well, we’d find out when we got there.

Almost there… heading west for Portugal

Early in the morning of January 7th 2005, we arrived in the low-key riverside town of Vila Real de Santo Antonio having ridden our tandem and trailer onto a small ferry across the river forming the international border.

I remember a faint mist hanging over the water and the sun still low in the sky as the ferry crossed the Rio Guadiana. A local asked us where we from and wished us good luck on the next stage of our journey. It was cool but still a pleasant temperature even at that time of day. Definitely more pleasant than an English winter.

By this stage, after riding hundreds of miles across Andalusia, we’d become a bit bored of southern Spain. Some of the towns were attractive, with plenty of historic architecture but most of the landscapes were bleak. Lots of wide open expanses, olive trees stretching into the distance and big skies but not a lot to relieve the monotony.

We were too excited at being in Portugal to spend much time exploring Vila Real. It’s a pleasant enough place with a striking central plaza but we had just landed – literally – in a new country and wanted to ride.

Riding west, sticking as closely to the coast as we could, I noticed two immediate differences: the sound of birdsong and the amount of both flowers and greenery in general.

Crossing the open interior of southern Spain, fields had come right up to the roadside, with seemingly every inch of ground ploughed and stripped bare. Agriculture all seemed on an industrial scale, with no space for wildlife or wilderness. 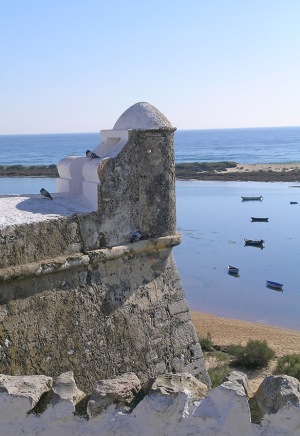 And amongst the plants and undergrowth, plenty of sparrows, pigeons, doves and other small birds chirping away. It was only on hearing the birdsong again that I realised how much I’d missed it.

Pedalling along in the sunshine, the first impressions were definitely favourable and over the next two months, as we picked our way from the far south of Portugal up to the north, the country really got under our skins.

This trip was in the days before smartphones and Garmins became ubiquitous. The only thing we had to help us navigate the length of Portugal was a Michelin paper map covering the whole country. I’d bought it in advance and had hoped to find more detailed maps once we were in Portugal – not knowing such things simply didn’t exist.

The Michelin map wasn’t bad as an overview, and at the time we weren’t to know any better, but it left off huge numbers of minor roads that could have made our experience even better than it was.

From the Spanish border, we continued west. We stuck to the coast for most of the way, enjoying a couple of days off the bike at Tavira but then took a loop inland to avoid the busy roads around Faro. 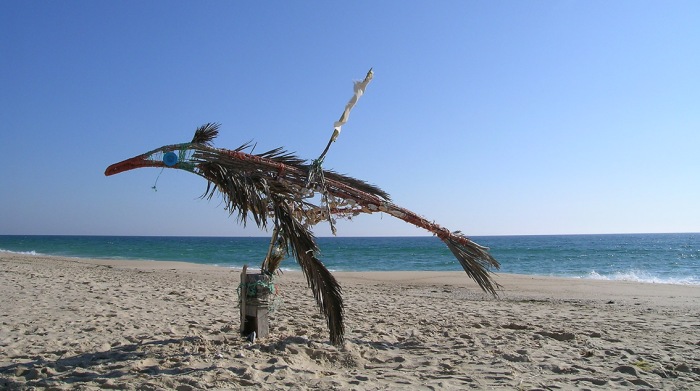 Sculpture we found on the beach near Tavira

Back on the coast, some of the sprawling holiday developments around places like Albufeira were a bit depressing but things improved enormously once we got to the old river port-cum-resort of Lagos.

We had a break from the bike near Lagos, spending a few weeks working on an old quinta (farmhouse) where the Dutch owners were developing a B&B complex. We had contacted them through Willing Workers On Organic Farms – as it was then called, a scheme whereby you provide half a day’s labour in return for your board and lodging.

While our tandem had a rest, we helped clear an old building that was being converted, built some recycling bins, watered trees, repaired fences and generally did whatever was needed of us Woofers. While we were there, the weather was perfect – blue skies from dawn to dusk, although bitterly cold at night. (Which was when we also learned that Portuguese buildings just aren’t designed to cope with the cold.) 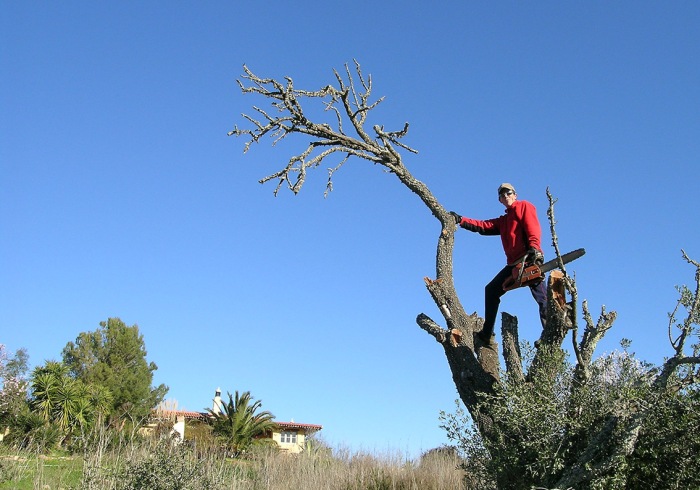 When we got back on our bikes and continued on from Lagos, the roads grew quieter and the landscape wilder as we headed towards the fishing port and surfers’ hangout of Sagres, beyond which lay Cabo São Vicente – the dramatic promontory that forms the extreme south-west tip of mainland Europe.

Turning north from the cliffs of the cape, we stuck to the seaside where we could (there’s no coast road as such). We loved the Algarve’s wild west coast, where some of the beaches reminded us of the coves back home in Cornwall – although with much better January weather.

but also detoured inland a few times – including heading for the historic Alentejo towns of Beja and Évora.

Praia do Amado, near Carrapateira on the Algarve’s wild west coast

As we headed north, we detoured inland a few times – including heading for the historic Alentejo towns of Beja and Évora.

On our ride towards Beja we were on rolling country roads with very little traffic where we clocked up one of our best average speeds of the whole year of touring. Our bike just seemed to eat up the distance and the hills were perfect – enough of an ascent to add variety to the riding but not enough to really slow us down, and lovely gentle downhills where we could build up a good head of steam.

Beja in early February was a sleepy place. The town had a pleasant historic centre but the worst thing about it – a downside we came across in many Portuguese towns – were the cobbled streets all around the centre. They looked pretty but were hell on backside and wrists after a long day of cycling (particularly on a laden tandem).

Cobbles on Roman bridge somewhere in the Alentejo

Over the weeks we spent in Portugal, the cobbles took their toll on our bike. We had various bits of gear fail and come apart. It may have been partly down to the fact we’d already cycled well over 4,000 miles (6,400km) by the time we crossed the border but I suspect the shaking and rattling over all those cobbles also played a major part.

If anyone is interested in the route we took, have a look at the South-to-North pages of the website’s Touring Routes section.

10 thoughts on “A Portuguese Love Affair – Part I”