The next Pedal Portugal guidebook – ‘Cycling The Algarve’ – is on its way and I’m looking for test riders interested in trying out some of the routes.

On the way to Monchique – first day of the touring circuit

The new book will basically be in three parts. The first will be a touring route based on the existing Algarve Adventure, which is a six-stage route around the western end of the region, starting in Silves and taking in some of the most spectacular hill and coastal scenery anywhere in south-west Portugal. Other stops along the way include Monchique, Zambujeira do Mar (on the Alentejo coast), Aljezur, Sagres and Lagos. The second part features two shorter routes with ‘there and back’ options linking Silves and Loulé in the Algarve and Almodôvar in the southern Alentejo. This will include one section taking in some of the better known beaches (and resorts) on the coast west of Faro. Thirdly, the guidebook contains a selection of day rides beginning from various towns in the western Algarve. For many of these I’ve used the local railway stations as starting points so that it should make the rides more accessible to people who aren’t touring but are staying in the Algarve on holiday and fancy taking in some of the best riding in the area. 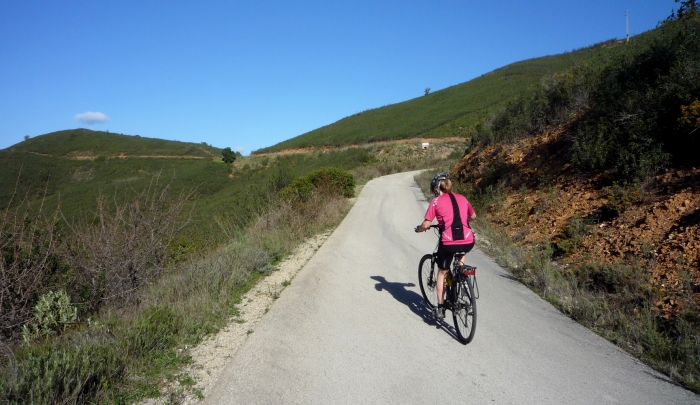 On a day ride from Silves

The advantage of the Faro-Lagos line (which also extends east to the Spanish border) is that it carries bikes for free in a large guards van and is also pretty cheap to use. The day rides are of varying length and difficulty, ranging from short and gentle to long and rugged. So far, the book contains the following options:

Each ride (and stage of the touring options) has its own map – which can be downloaded as a .gpx file or similar if needed, plus a breakdown of the route with distances and detailed directions, plus suggestions for alternative routes and things to see along the way where appropriate. Most of the writing is now complete and the bulk of the work left is going to be proofreading, finishing off all the maps and formatting the book ready for publication, which will hopefully be in late spring/early summer. In the meantime, if there’s anyone out there who’s going to be in the Algarve and would like to test ride any of these sections over the next few months, I’d love to hear from you. Add a comment below or email me at pedalportugal@gmail.com Cheers, Huw