Over the past few years I’ve spent many, many hours carefully putting together route maps for cyclists coming to Portugal and putting them on the Pedal Portugal website – but now Google seems to have messed up the lot!

What is it with these companies that feel they have to keep changing things?

I used the old version of Google Maps for all of my maps. Partly because when I started it was the only version, but also because I think it’s much better for route planning than their “upgraded” new version.

To begin with, the old maps still worked fine. Now, though?

For some reason, Lagos in the Algarve has become Lagos in Nigeria (interesting cycling route!) and other carefully chosed locations have also switched not just country but continent!

With some of my maps, the links still go to a map but now show routes on motorways (closed to cyclists) rather than the carefully-chosen back roads on the original version. With other maps, the links still seem to go to the old version of Google Maps but the various ‘destinations’ along the way seem to now come up as GPS references and Google seems unable to plot a route between them.

One of my more recent maps  (sorry, showed) a day ride in the western Algarve starting in Lagos. Now, if you click on the link on the Lagos Back Roads page the map that comes up starts from an ‘Unknown Road’.

The problem is, the map then asks which location I meant and gives me a choice of options – including roads in the United States, Cameroon, Australia, India, Bolivia, Iceland and Pakistan. Random, or what?

The pain of it is, this means I’m going to have to redo every single map. Rather than embedding thumbnails in the webpage, I could just put in a simple link to the URL for each map. Unless anyone has any better ideas… or a better alternative than Google Maps? (Any advice or suggestions welcome.)

In the meantime, if you anyone using the Pedal Portugal site needs the correct map for one of my routes, please drop me a line via Facebook or to pedalportugal@gmail.com

Hopefully, normal service will be resumed soon. In the meantime, here’s a picture from my most recent visit to Portugal. This will probably be the cover image for the next Pedal Portugal guidebook, Cycling The Algarve.

This will include a touring circuit of the western Algarve (and a little bit of the Alentejo coast), plus a selection of day rides in the area between Faro and Sagres. Publication will hopefully be in the late spring or early summer. 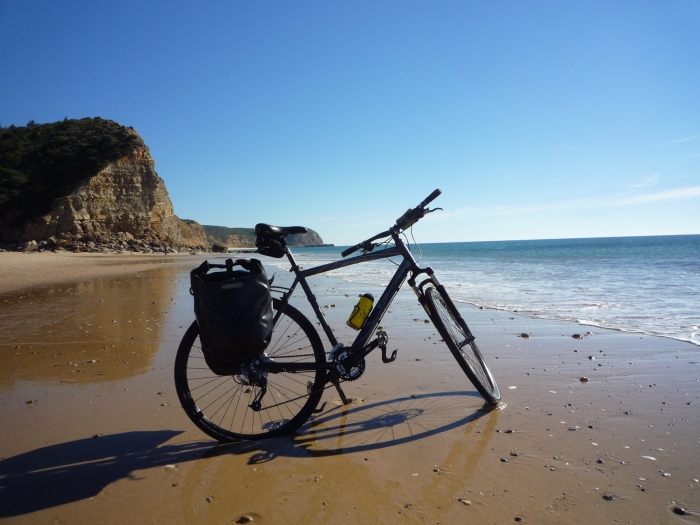 Simply gorgeous – the beach at Boca do Rio, in the western Algarve. Thanks to Cycling Rentals for the bike!