All kinds of cycling-related inquiries turn up in the inbox at at Pedal Portugal HQ (which is generally wherever my laptop happens to be).

Some are one-offs – like advice on a particular route or contacts for local cycling groups (still looking). Others are quite unusual – like what are the best roads for skateboarding from Lisbon to Faro!

But quite often I end up repeating myself with answers to a few common questions. I could be rude and say ‘look at the website’ and you’ll find the answers but I thought I’d try and be a bit more helpful, save myself some work in the long term and put together my (current) top 10 hints and tips for anyone new to cycling in Portugal.

I wouldn’t claim the following will answer every question. Some people might disagree with me (other opinions are available – please leave them in the comments box below). But for what they’re worth:

This might be stating the obvious but it’s a very important point. There are flattish bits – mainly around the coast. But these also tend to be where most people are, hence more traffic and they’re also not generally the prettiest or most interesting parts. The Alentejo (one of my favourite areas for cycling) is what I would call ‘rolling’, with few major hills.

Elsewhere? Well, I would define most of Portugal as rugged. The highest mountains in the country scrape in at just under 2,000m (6,560ft) and the majority are quite a bit lower. But much of the country is decidedly up and down. Deep river valleys cross a lot of it,meaning you’re going to do plenty of climbing – and need some good gears – if you plan to ride any distance.

For more information on different areas of Portugal, go to the Day Rides section and look at the descriptions of the various regions.

Unless you’re a lizard or otherwise used to extreme heat, don’t even think about doing any serious cycling in Portugal during the summer months. Portugal is one of the southernmost countries in Europe, with the Algarve on a similar latitude to parts of North Africa.

For the Alentejo, and some other parts of the interior, afternoon temperatures of 40ºC (104ºF) and counting are normal during July and August. For pretty much anywhere in the country expect afternoon highs of at least 35ºC (95ºF).

For cycling the best times to visit Portugal are generally the spring and autumn (fall) for the northern half of the country and any time from September through to April for the Algarve and the Alentejo. See When To Go… for more information.

For most cyclists, printed maps can be useful for an overview of a region or route. Otherwise they are rarely worth the paper they are printed on.

Invariably, maps of Portugal don’t show enough detail, are inaccurate or out of date. Often all three. If you want to navigate accurately – and find those little back roads – use an online map you can download onto a smart phone or other device.

As an example, the image on the right shows part of one well-known company’s current map of northern Portugal. With a copyright date of 2011, it shows as a working railway a line that went out of service decades ago but leaves off many back roads – and ignores a new motorway that opened in about 2009.

When planning a route, try checking it out on Google Streetview to get an idea of what kind of roads you’ll be riding on.

No one is going to expect you to be fluent. In fact, most Portuguese people will be impressed if you can manage a few simple phrases in their language. Even if you only learn to say hello (ola), please (por favor) and thank you (obrigado or obrigada depending on whether you are male or female) it shows a bit of respect to the people whose country you’re a guest in and you’re guaranteed to get a better response from the locals.

Also, unless you are in the Algarve or other tourist hotspots, you can’t guarantee finding anyone who can speak English. Sometimes you might find someone who speaks a bit of German or French but there will be times when you may have to resort to sign language. (Google Translate can be useful but can’t be completely trusted!)

See Language and the accommodation glossary for a bit more information on the subject. 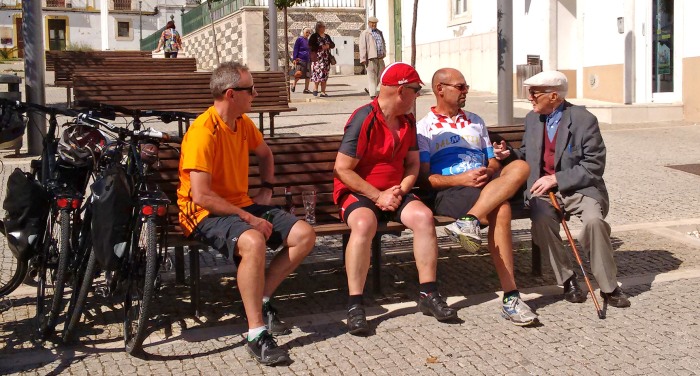 Hopefully you won’t need it but if you’re ever involved in an accident or any other type of brush with authority, the first thing police or other officials are likely to want to see is your passport. If you need medical assistance of any kind, the Portuguese would never leave you lying by the roadside but they will ask to see copies of your insurance (including an E111 or EHIC card for European Union nationals). So don’t leave it at the hotel/campsite.

On the issue of road safety, Portugal has a poor record and driving standards are not always that high. However, drivers are often extremely polite and considerate towards cyclists – once they’ve spotted them. I’ve had cars stay behind me for ages until they decide it’s safe to overtake – showing way more patience than they would in the UK.

Many people who have never been to Portugal before have only heard of the tourist hotspots like Lisbon, Porto, the Algarve and the Douro Valley However, these are not generally the best places for cycling. The cities are definitely worth a visit but have lots of traffic, few cycle lanes and are mostly surrounded by some pretty ugly suburbs (same applies to Faro on a smaller scale).

Instead of trying to ride out of the cities, use ferries and trains (urban and regional services) to get clear of the suburbs rather than waste precious holiday time riding through the grotty bits. There are some lovely parts of the Algarve to explore on two wheels but this region also gets way more tourists than the rest of Portugal combined so the coast in particular can be very busy (and quite built-up).

The Douro is a beautiful valley but is deep and narrow – there are no roads next to much of the river and where there are roads in the valley bottom – particularly closer to Porto – they tend to be relatively busy, with poor visibility and not a lot of room for cyclists. Also, if you want to go left or right you will have to climb some pretty major hills to get out of the valley.

There are many other options to chose from. See the highlights page for a few ideas.

If you are not cooking for yourself then your best chance of getting anything vaguely healthy is either to have a salad (often lettuce, onion and tomato and nothing else) or a soup.

You can buy plenty of fresh veg and fruit in the shops but you’re extremely unlikely to get anything green served on your plate.

When the Portuguese go out to dine they expect to eat meat or fish. Plus lots of carbohydrates. And lots of butter, salt and garlic.

Vegetarian options are very unusual and anyone on a restricted diet of any kind is likely to struggle. Restaurants may be willing to help but even if you are able to explain what you want, don’t expect a lot of imagination if you want anything other than the dishes on the menu.

On the plus side, the house wine is normally very drinkable and pretty cheap. (And it’s made from grapes so that counts as a portion of fruit, doesn’t it?)

Carrying a toolkit, spare inner tube and pump is sensible even if you’re going off for a short spin. But if you’re touring around it’s worth realising you can’t expect to find bike shops around every corner, so carrying other spares is definitely a good idea.

Also, if you bring your own bike and it’s anything other than standard, you may have trouble finding spares as most cycle shops will have a fairly limited range. Racing road bikes and mountain bikes – only foreigners ride hybrids or tandems! – are what Portuguese cyclists ride and this is reflected in what’s carried by bike shops. I doubt if it is complete but see the Bike Shops & Mechanics page if you need it.

9. Shop around for tours

If you are thinking of booking a guided or self-guided tour make sure you shop around. Many companies offer tours of Portugal and their prices are just as varied – even though they sometimes use the same hotels!

The cost of guides, a back-up vehicle and the level of service and support you get will vary. However, decent food and accommodation in Portugal is cheap in relation to most other European countries. So compare prices, see what you’re getting and don’t pay more than you have to. 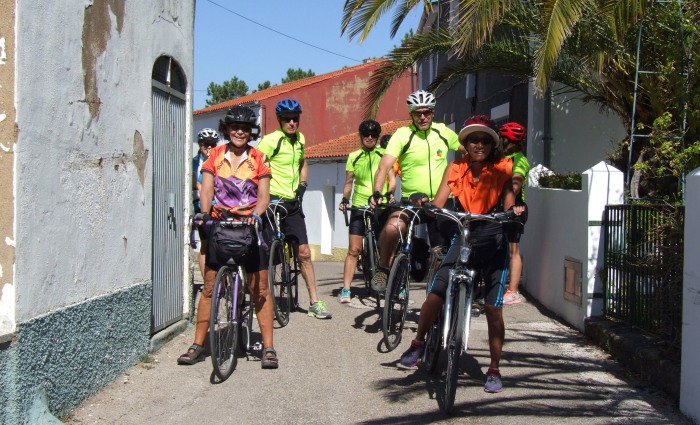 This can be a problem for anyone who wants to get to a particular part of Portugal with their own bike or wants their luggage moved around while they ride.

Some trains will carry bikes but not all (although guards may ignore the rules if they feel like it). The same applies to buses – you probably need to have your bike packed as if for taking on an aircraft if you want to take it as luggage.

Taxis are another option – particularly for short trips – but this can be expensive. If you use taxis I would recommend you agree a fixed price before setting off on any longer journey. For more information on carrying your bike on various forms of transport, see this page.

The other answer is to hire a bike and use a company that will deliver and collect to/from the start/finish points of your tour.

Some people might want to tour by bike and have their luggage transported around for them. Unless you sign up for some kind of guided tour (see above), the only other option I can think of is using taxis. A group of Canadian cyclists who used my route planning services worked with a local taxi company who moved their bags for them on a tour of the Alentejo. But in other parts of the country? Possible but very difficult to arrange until you’re on the ground.

I’d love to have feedback on these tips. Particularly if you can correct my mistakes or add useful extra information – I’m only one guy and I can’t know everything about riding in Portugal. Please use the box below to add comments or any tips you might have that will make life easier for your fellow riders.