I don’t often buy lottery tickets but if I ever had a few million to spare I know what I’d love to do – convert some more of Portugal’s old railway lines into decent cycle trails. 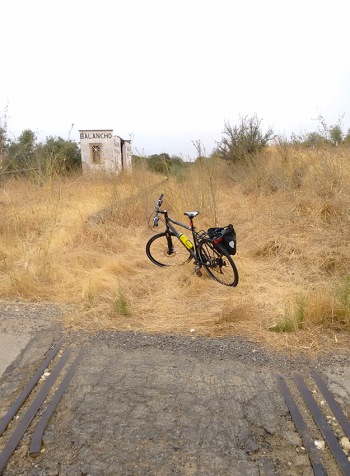 Another abandoned Alentejo line – this one east of Evora

The country has so much potential. But so few good quality off-road cycle routes of any length.

There is the excellent Ecopista do Dão between Viseu and Santa Comba Dão – a 52km section of converted railway line. It’s got too many chicanes at the Viseu end to be perfect for cycling but it’s a wonderful way to explore some sections of the Mondego valley that are very hard (or impossible) to access by road.

I’ve also heard good reports of the Ecopista do Tâmega, a 40km trail following the line of a metre-gauge railway up the Tâmega valley (inland to the north-east of Porto). Sadly, I have yet to ride this one but it’s on my wish list.

Near Valença, the Ecopista do Rio Minho runs for about 20km along the banks of the river forming the northern border between Portugal and Spain.

There’s half a decent cycle trail heading north from Évora. The Ecopista Ramal de Mora is another converted railway line. Starting from the eastern side of the city, the path is sealed for the first six kilometres or so but turns to gravel as it heads roughly north for just over 20km towards Arraiolos.

The old line continues to Pavia and Mora but a few bits have been fenced off (probably illegally). Plans exist to extend the path to 60km to Mora but as far as I’m aware this is another project yet to be realised.

There’s very little official information online about the state of the project. (Any updates welcome.)

There are a number of other shorter cycle paths – or ecopistas as they are called in Portuguese. But as far as I know these are all well under 20km in length. And that’s about it.

There are also plenty of projects that exist on paper. And sometimes the wheels of Portuguese (and European) bureaucracy grind pretty slow but do get there in the end. When I lived in Viseu only about eight kilometres of the Ecopista do Dão had been completed and the rest was just a dream. Of course, they went and finished the project just after I moved away.

And despite the money and work that has gone into these trails, they haven’t always been that well thought-out or finished. There’s very little signage to attract anyone non-local to the Ecopista do Dão and the designers have religiously followed the line of the railway. Meaning it ends in the middle of nowhere (where the old railway used to divide) and is on the opposite side of the Mondego river from Santa Comba – which can only be crossed here via a motorway-standard bridge closed to cyclists! 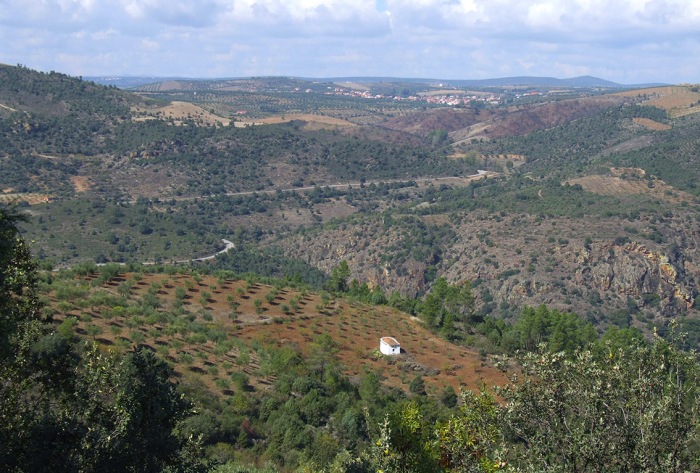 The rugged and remote landscapes around the Rio Sabor

In other parts of Portugal a start has also been made on other trails. The Ecopista do Sabor begins from the town of Torre de Moncorvo. On my last visit (October 2014) there were only a few kilometres to this trail and it was all unsealed. But this is a route that has huge potential to open up a remote and little-visited part of northern Portugal.

One problem for cyclists thinking of exploring the Tras os Montes region north of the Douro is the limited window of opportunity. It can be freezing up here in the northern hills from October through into April, while July to August are way too hot to do much movement of any kind. And another issue is the hills. There are some deep river valleys in these parts meaning you can’t cover any real distance without having to tackle major climbs.

The centre of Mogadouro, a quiet town in the Tras os Montes region

So imagine how good it would be to have a dedicated cycle trail to open up the region. The old railway line from Torre de Moncorvo (still shown as in operation on Michelin maps!) goes around 100km north-east to Miranda do Douro. There are some beautiful landscapes in this area and some lovely historic towns that see very few tourists in comparison with other parts of Portugal.

It would be wonderful to see the Ecopista do Sabor completed and up to the standard of the Dão route (or better). And there are all those derelict lines in the Alentejo as well as other parts of Portugal.

I try to keep track of these trails on a dedicated page on the subject on the Pedal Portugal website. But think what could be done by a cycling philanthropist with a few spare million? Anyone interested in helping out?

One thought on “Oh For A Few Spare Million”