Keep going back to the same place and it’s easy to get complacent. To think you’re an expert and you’ve pretty much discovered all there is to see and experience.

But, despite visiting Portugal on a frequent basis since 2005 (and living there well over two years), I was delighted to discover this year that the country still hasn’t run out of surprises and fresh treats for me.

I spent about about four-and-a-half months in Portugal during 2016, some of that time leading guided cycle tours and some of it preparing for the tours and researching routes and places to see.

One of my stand-out discoveries was at Elvas, a town in the north-east Alentejo, close to the border with Spain. I’d been to Elvas quite a few times before and it was already one of my favourite towns in the country. It’s a charming place and completely enclosed by some of the most impressive and best-preserved fortifications anywhere in Europe. (Not just my opinion, its 17th century walls earned it UNESCO World Heritage status a while back.)

I’d noticed the Forte da Graça before. It’s on one of the hills overlooking Elvas and from below doesn’t look that dramatic or big. Until fairly recently it wasn’t open to visitors either and had been pretty much abandoned and neglected.

But, following a major restoration project that began in 2014 it’s now an absolutely superb addition to the already wonderful collection of sights in and around Elvas – making a trip to this part of Portugal even more worthwhile for anyone with even a passing interest in old forts.

The site was first fortified by the Spanish – they conquered the hill and placed artillery on it while laying siege to Elvas in 1658 when Portugal was trying to regain its independence.

By the 18th century, with artillery becoming much more powerful, the hill became a crucial part of improvements to Elvas’s defences and 6,000 men were employed to build the Forte da Graça, a huge, angular complex of earthworks, angled walls, firing platforms and hidden mantraps – all designed to give its defenders absolute control over the surrounding landscape.

Also known as La Lippe after the man who oversaw it’s construction, one late 18th century visitor commented: “The fort continues to be a masterpiece of fortification, incorporating all the skill and art available at the time…”

Many contemporary military commentators considered it impregnable and another visitor explained: “There is a reservoir constantly supplied with water sufficient for the garrison of 2,000 men for two years, and stores of corn and provisions for that time are also laid up. There is a mill within the walls for grinding corn, and an oven for baking sufficient bread, so that as there are no means for taking the fort but by treachery, surprise, or famine.”

But although the Forte da Graca was a truly memorable place to visit, there was also the joy of simply discovering even more gorgeous roads to ride.

Exploring the countryside between Marvão and a little village called Beira I found a great little loop into a corner of Portugal I’d never cycled before. The road was through a remote rural area bordered by Spain to the east and north and one of the quietest spots you could hope to find

My wife Carolyn and I tested the road out when we were on our ‘pre-tour’ in September and we took our Border Castles group on the route the following month.

Another real treat we discovered for the first time this autumn was the Hotel de Moura.

I’d admired the building’s tile-covered facade on previous visits to this attractive little provincial town in the south of the Alentejo but we’d never been inside until this September.

Carolyn and I stayed there on our pre-tour and we were back for our Eastern Explorer trip later in the month.

It’s a gorgeous building – and the back is even lovelier than the front, with an enclosed courtyard, spiral staircase, raised terrace etc. The rooms inside were equally attractive and the hotel is ridiculously cheap considering the standard of the accommodation.

Equally important for hungry cyclist, it also has a really good buffet breakfast – in a room with a really impressive plasterwork ceiling.

In fact, Carolyn decided it was her favourite hotel in Portugal after just the one visit and I think our riders could all see understand.

Which was why, when planning our latest guided tour – the new Southern Spring Tour – I factored in a visit to Moura partly just to give us an excuse to stay here again!

While touring around Portugal we always try our best to sample as much of the country’s food and wine as we can. It would be rude not to really.

But while I’ve long loved Portuguese wine, I’d never really thought of the country as producing much in the way of spirits. 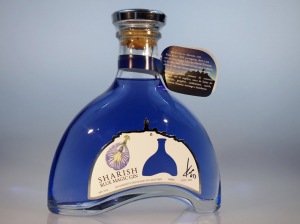 Until that is we discovered Shariz Blue Magic gin… made just outside the small town of Reguengos de Monsaraz.

The curious thing about this gin is that it’s blue. The gin, not the bottle. And when you add tonic, it goes a kind of purple-pink colour. (I’ve got one next to me now.)

I could tell you how it works but that would spoil the magic. You’ll just have to go to the Alentejo, buy a bottle and discover it for yourself.

But it just goes to show, you can keep going back to Portugal and not get bored. There’s still plenty to discover!