Well, 2018 has certainly been busy for Pedal Portugal. It was our third year of running guided bike tours and we did six this year – with a total of 64 riders – our busiest yet.

Our six bike tours took us from the northern Beira region (almost up to the Douro River), criss-crossed the Alentejo and went all the way down to Sagres and Cabo São Vicente at the south-west tip of mainland Europe.

During the year we introduced one new tour, repeated two of our established trips and did a custom route across the southern half of Portugal.

For us it began with flying out to Portugal in mid-February to “pre-tour” our new route – the Southern Explorer. Carolyn and I had ridden 90% of the route in the past but there were a few bits we wanted to double-check – and it was an ideal opportunity for the two of us to enjoy some cycling together. (Also meant there was no argument over who was riding with the tour group and who was driving the support van.)

Normally, the weather in February isn’t bad. You can expect some wet days but also a fair bit of sunshine. I’d been studying the weather reports before we left and had high hopes – January had been pretty much dry in southern Portugal, with weeks of sunshine and some very nice cycling temperatures.

We flew into Faro and it all seemed okay. For about one day. Then, like for much of the northern hemisphere, the weather went crazy.

Several major storms hit the country while we were doing our pre-tour. A tornado hit the Algarve ripping roofs off a number of buildings and there were water spouts off the coast in several places. Rivers that I’d only previously seen as little trickles were suddenly foaming brown torrents.

Waterproofs were definitely required but most of the time it wasn’t that bad. Although there was one day when it took us about four hours to ride 32km (20 miles) because of the horrendous head winds. It was one of those winds that was really hard to ride into most of the time. Then it would suddenly gust and literally blow you to a standstill.

But on the plus side, we did discover a great new route that included what soon became one of my favourite roads in Portugal – a stretch of freshly-surfaced single-track through some beautiful hill country west of Mertóla.

The other big attraction of this new tour is that we skip the most well-known tourist sites, spending our days riding through quiet countryside and staying in some out-of-the-way places that don’t get that many visitors.

We ended up running the Southern Explorer three times in 2018. The first in March, again in April and in October-November at the end of our year.

Warmer, drier weather would have been appreciated on the first and last tour but at least each group had sunshine when we got to the beach at Lagos at the end of the tour.

Our custom tour was for a group of 14 riders, mainly members of The Bohemian Club from San Francisco. This was a larger group than we normally take but great fun – those guys know how to ride and how to party!

The route we designed for them was mainly a mix of our Southern Explorer and Algarve routes, with some longer sections to boost the mileage.

We started in Évora and zig-zagged across the width of Portugal before heading out to the Atlantic coast and then ending up down at Lagos in the Algarve.

We also did our third Eastern Frontier tour with a group of riders who were all from the Edmonton Bicycle & Touring Club.

Yet again this was our toughest tour, partly because of the distances and elevations involved but also because of the heat. Even though we didn’t set off from Guarda until late September we were still riding in temperatures of over 30ºC most days.

This proved a bit of a shock to the system for our Canadian riders as the first snows of the year had already fallen before they left home for our tour!

We were soon carrying extra supplies of water in the van for pouring over heads and by the end of the tour were regularly dipping into fountains, streams and anything else we could find in an effort to keep cool.

Our route for that bike tour took us up to the fortress town of Almeida (crucial battle site in the Peninsular War), then down the border with Spain through some really wild country, ending at Beja in the southern Alentejo.

Our other tour of the year was our Border Castles route – a circuit of the north-east Alentejo that takes in well-known highlights like Évora and Elvas, plus a number of smaller places that don’t see as many visitors. 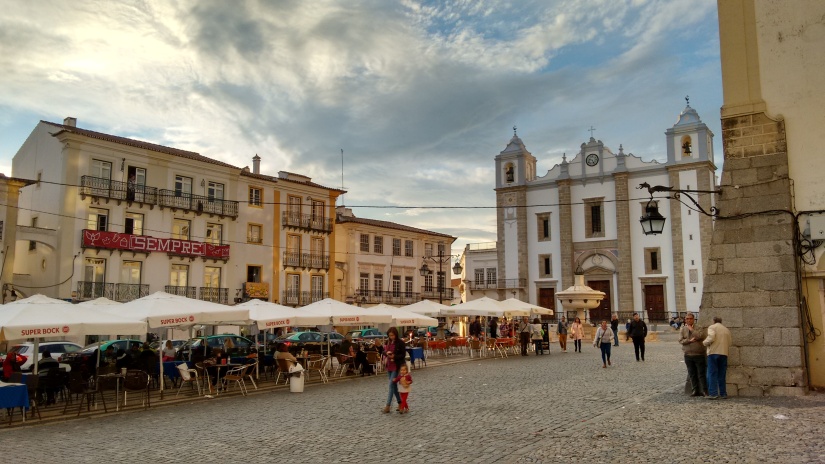 Evora – beginning and end point for the Border Castles tour

We set off in early October and although the weather was definitely a bit more autumnal it wasn’t too bad. So when a couple of our riders (American) started talking about a hurricane, I assumed they were talking about something back home.

Then I looked at the forecasts on the Portuguese met office site and realised there really was a major storm heading our way. Again!

Luckily we were far enough south and east that Hurricane Leslie’s 110kph winds didn’t quite reach us. It was pretty blustery the next day as we rode towards Castelo de Vide but we still had more sunshine than cloud.

It also struck me later that day as we cycled around the base of Marvão that it was less than three weeks since we’d been past the same spot with our Eastern Frontier group – at which point we’d all jumped in the river to cool down before tackling the last climb of the day.

Hopefully the weather in 2019 will be a bit more settled than 2018. But whatever the elements throw at us we know we’ll still have fun – there are some beautiful roads to ride out there. Plus all that cycling is one of the best ways there is to build up a good appetite and thirst for the end of the day!

To see what this year’s riders thought, please take a look at our reviews page.

Two of next year’s tours are already fully booked but there’s still space on three trips for anyone interested in joining us: