Back in August I wrote a post about the dilemma of what to pack/take on a cycling trip and listed several of the items that make it to my ‘must have’ list.

As promised, this is a continuation of that list with reviews of three more of my personal essentials:

On the road with tandem and trailer, September 2015 (Hungary not Portugal) 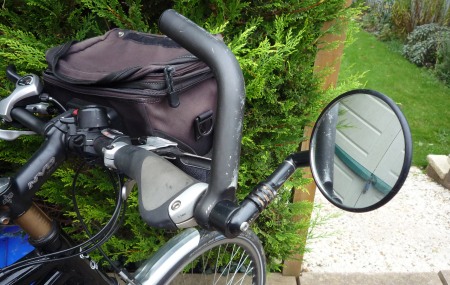 I bought this ahead of a year-long tandem trip starting in North America and would now hate to tour without it.

This is a real five-star piece of kit – particularly when you consider the price.

This version slots into the end of a pair of straight bars with a small allen key bolt to hold it in place. There are three swivel joints on the mounting, making it extremely easy to adjust and position so you get the best rear view.

I’ve used it for months on end and have never had any problems with it. The mirror is big enough to let you see what’s coming up behind and stays just where you set it. (The hinges also make it simple to fold out of the way for going through gates, doors etc.)

It also only takes seconds to swap it from one end of the bars to the other if, like me, you’re sometimes going from the UK to Europe and have to adjust to riding on different sides of the road.

I still glance over my shoulder to check the traffic at times, but having this mirror lets me keep a much better check on the road behind me and I certainly feel a lot safer with it.

The company also make versions that attach to STI levers and those with the cable coming out of the top but I’ve not used these.

Keep away! Defending my Trangia (and dinner) from marauding mallards

If you’re camping then I really rate these stoves. They’re not the cheapest or the lightest but I think they provide an excellent balance between price, weight and quality. You get two pans (just big enough to make a meal for two hungry cyclists), plus a kettle and lid/frying pan, all of which pack inside the base and windshield.

The pans/kettle are suspended inside an outer shield with the burner below, making Trangias much better in windy conditions than some stoves.

The standard stove comes with a spirit burner but I’m not a fan of these for two main reasons: it can be hard to get hold of suitable fuel in some places and the burning spirit leaves your pans black and filthy!

The gas adapter isn’t cheap (bought separately it can cost as much as the stove) but it means you can then use canisters of clean-burning gas.

The main problem with these stoves is the standard adapter fits screw-top canisters, which can be hard to find in some places (as can meths or other fuel for the spirit burner). If coming from the UK, however, I’ll generally take two large canisters and find this is plenty for a month’s camping. (Ironically, the canisters sold by Coleman in the UK are manufactured in France but I’ve never yet seen them on sale there.) 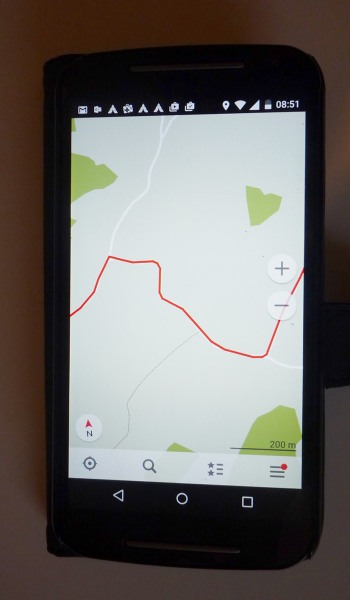 Hate to admit it but…

I love maps. I can sit and stare at them in the same way that some people look at books.

Until very recently I always swore by printed, paper maps – and still love both the tactile feeling of holding a map in my hands and (more importantly) being able to get a much better (bigger) overview of where I’m going.

This summer, though, I somewhat reluctantly bought my first smartphone (a £135 Moto G) and used it as my sole navigational aid on a six-country, 1,000-mile tour around eastern Europe.

Before going I worked out possible routes for the trip on the free version of ridewithgps.com and then uploaded the routes to my phone, where I had downloaded free maps of the countries I was visiting from MAPS.ME

We didn’t stick to my routes all the time but navigating on the phone was so easy.

The GPS tracker means you can always find out exactly where you are to within a few metres. You can be in the wrong place but you can never be lost!

Because the maps were already downloaded, and using GPS doesn’t use the phone signal, using the phone to navigate didn’t cost a penny.

The detail from the maps is also extremely good – far better than anything I saw on the paper maps I checked out in local shops. You can also use the system to find out how far you are at any point from the nearest ATM, shop, hotel, or whatever.

The only time we had any problem was in northern Croatia where we encountered some roads that were marked as proper roads but weren’t sealed when they went off into the hills.

I still love my paper maps but I think I’m a convert to GPS mapping – and look forward to testing the system on my next visit to Portugal where printed maps are generally a joke!

Anyone got any thoughts on any other touring essentials?

2 thoughts on “Some Of My Favourite Things – Part 2”