Cycling has always been in our family. As kids we were dragged out every Sunday for bicycle rides. Family holidays always involved yet more cycling. The bikes would be loaded up and we’d be off for a week or two of camping – and what seemed like cycling every day.

Wonderful? Sometimes. The cycling wasn’t optional and during my early teens I did develop a bit of a love-hate relationship with my bike.

Luckily, I got over that. Cycling is my favourite escape and my wife and I have done a couple of pretty major tours on tandems, as well as developing Pedal Portugal.

But back when I was growing up, my parents came pretty close to putting me off cycling for life. Visiting my Nan and Grandad was always a bit of a relief as they were much more chilled out. I was aware they’d been cyclists in the past but by the 1970s their riding days were behind them and what ‘old’ people had done in their younger days never featured on my radar. 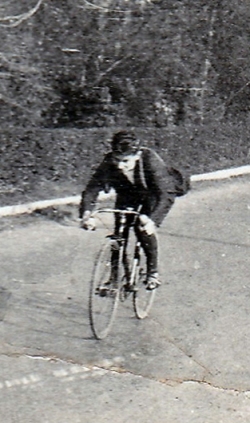 But as I’ve got older I’ve begun to appreciate more of what they did and just what a big role cycling played in my Nan and Grandad’s lives.

And to realise they were both much more hardcore riders than I’ll ever be.

My Grandad, Will ‘W. F.’ Wiggs was a keen cyclist from a young age, along with several other members of his family. Born in Peckham in 1900, he was competing in various club events in the 1920s, winning medals from the Southern Roads Club, South-Eastern Road Club, and Bath Road Club.

During a Southern Roads Club team event in August 1926, he chalked up 185 miles and 732 yards in 12 hours. A staunch vegetarian from an early age, he beat that distance the following year, managing just over 190 miles in 12 hours during an event run by the Vegetarian Cycling & Athletics Club.

Not bad considering he was probably riding a single gear, steel bike while wearing a tweed jacket and plus-fours!

I’ve recently inherited a couple of old photo albums that once belonged to my Nan and Grandad. The pictures are tiny – most are barely two inches by three inches and the details are sometimes hard to make out.

Many have no captions and one above just had “Roslyn Ladies ’12’ 1929” written underneath. To begin with, this meant nothing to me and I didn’t recognise anyone in the shot.

Then I started sorting through some old family papers and found the document on the right, which certifies that “Miss M Glover rode 177 miles 6 furlongs on August 25th 1929” in a 12-hour time trial run by the Rosslyn Ladies Cycling Club*.

Which is when the penny dropped. May Glover was my Nan’s maiden name. And looking closer, I’m now fairly confident that the woman rider pictured on the right is my Nan – then 21.

Whether it was a common interest in cycling that attracted my Nan and Grandad to each other, I’ve no idea. (Although it might also have helped that they lived next door to each other.)

Whatever drew them together, they were soon tandem riding partners and married in October 1930. As can be seen from the picture at the very top of this post, it’s also clear that the arrival of small children didn’t stop their cycling.

My mum was the eldest of their three daughters and, as they grew up, the Wiggs girls continued the cycling – joining my Nan and Grandad on local rides around Kent and Sussex and on longer camping-cycling tours all over the UK. 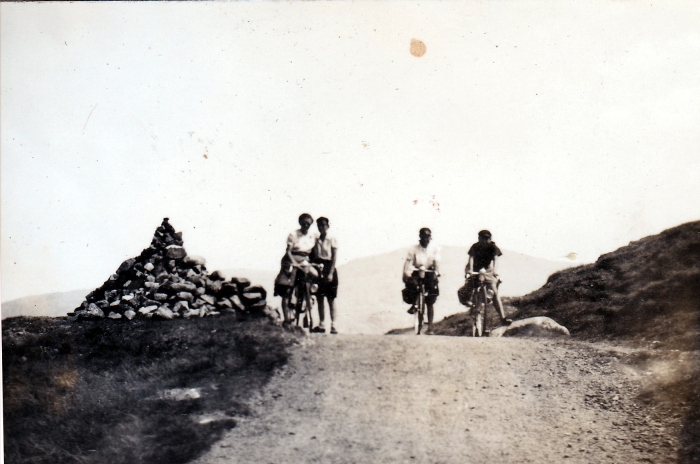 So, thinking about it, my Nan and Grandad probably bear at least some of the responsibility for the fact I was dragged out cycling as a kid whether I liked it or not. But, more importantly, digging through these old pictures and other memorabilia has given me a new respect for my grandparents.

I’m not sure I would have managed 177 miles in 12 hours even when I was 21. My Nan was clearly a tougher cyclist than me. Probably much tougher!

*Note: Since publishing this post, I’ve done a little more research and it turns out the Rosslyn Ladies Cycling Club were quite groundbreaking. Set up in 1922, it was one of the UK’s first female only clubs – back in an era when women cyclists sometimes had more than just abuse thrown at them. This Cycling News article tells much more of the story. The open road event in which my Nan is pictured was only the second of its kind ever held.

August 1950: My Nan (left) and her three daughters at Three Bridges, Crawley, Sussex.

21 thoughts on “My Nan Was Tougher Than Me”